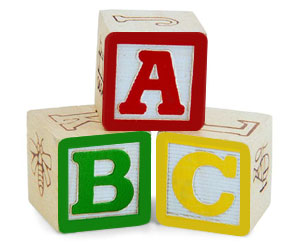 The ABC Animal Game is perfect for large groups of people ages 10 and up. Each player takes a turn coming up with an animal name that begins with a letter of the alphabet. All animal names stated have to be remembered and repeated by each player.

Player three has to come up with an animal that begins with C and repeat the prior animals in order "A for antelope, B for bat, C for cat.

You continue to go around the room with everyone adding to the string of animal names AND repeating every animal name in alphabetical order.

After player 10 goes, player one begins again with the next letter in line which would be K and the whole process is repeated until you get to the end of the alphabet. The person who has the letter Z will have to repeat the 25 animal names given for each of the prior letters.

This is a great game to play because several people can play at a time and it is hysterical because people have a hard time remembering each animal for each letter. Plus can you think of an animal name for the letter Q? I can think of only one. Quail!