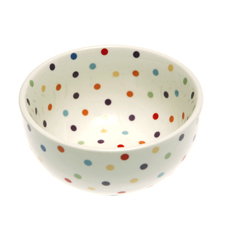 The Bowls Party Game is a game that is so fun for a group of 6 or more. No need for fancy items to play; just a clock/watch, a bowl and some pieces of paper.

Each person starts with a piece of paper and writes down 5 nouns in a list on that piece of paper. They can be as simple or as hard as you like. Then someone collects all the pieces of paper in a bowl.

Number off into 2 groups.

One player on the first group starts with the bowl of lists.

Round 3: Start with the next player and repeat the process one more time. However, this time the player with the bowl has to act out each word on the list and get his team to guess the entire list correctly. Each team has 45 seconds to complete as many lists as possible. Each list completed counts for 1 point. Continue around the circle until all lists have been completed. Tally the points.

The team with the most points win!

Tip: Remember to have fun!!

TPQ Comment: This Bowls Party Game is perfect for theme parties because it's hard finding games that work well with large numbers of people. It's like Charades without having to act out the word. Thanks for sharing Amanda!