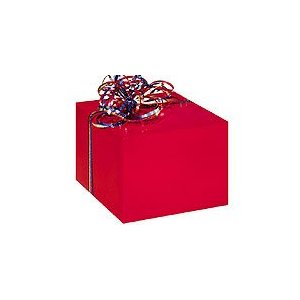 Whose Will It Be?

At a party recently, we played "Unwrap the Package Party Game". There were several different gifts wrapped and thhe guests didn't know what was in the box.

A gift was given to a person at each table at the party. Music was then played, and while the music was being played, the people at the table passed the present around to their right. When the music stopped, the person holding the present unwrapped it.

It turned out that each present was wrapped several several several times. If you were the person to unwrap the gift, and it still had wrapping paper underneath, you had to keep the present in play. The music was then played again, and the present sent around the table.

When it came time to unwrap a layer of wrapping paper, if there was no more wrapping, you were the person to keep the gift!

TPQ Comment: I have heard of passing the gift games with music but never having several layers of gift wrapping. You could also put one box inside of another, say 3 boxes for each gift. My husband used to wrap our kid's Christmas gifts this way. It would take them forever to open their Christmas gifts but the anticipation and the fun that it created was so worth it. Thank you for sharing Erica.